We have recently changed the design of our single-dose sachets to make them more environmentally friendly and more suitable for our organic products. Previously the sachets were black with golden letters and a lot of black ink had to be used to create this design.

In a sachet the ink is very close to the product and the scent of the ink can mix with the natural scent of the contents. Therefore we have chosen a material that already comes in white and needs only a little bit of ink to print. We are now gradually changing the sachets of all products to the new design. INSTANT LIBERATION is the first product that we are launching with the new design.

In spring and summer many people are suffering from allergies and the skin and eyes become irritated. For our products we have selected a range of plants and ingredients that have strong calming properties, so therefore they are also indicated for allergy affected eyes and skin.

This year’s East End Film Festival goodie bags are sponsored by green companies and LE PURE did not miss the opportunity to be part of London’s biggest alternative film festival. This festival is a completely not-for-profit CIC (Community Interest Company) and is committed to the work of first and second time directors.

The East End Film Festival was founded in 2000 and is one of the UK’s largest film festivals. It has a very diverse and rich programme and furthermore enables independent filmmakers to show their pioneer work. The EEFF’s mission is to offer a platform for filmmakers living and working in East London, where they can show their first projects. In the heart of London’s most dynamic quarter visitors get introduced to a totally innovative cinematic experience. The East End Film Festival attracts more than 30,000 visitors each year and has established itself as a major international film festival.

Preparing your skin for the summer should be done well in advance of long sunbathing sessions. The ideal preparation already starts months before. The skin has the ability to protect itself and this ability, just like a muscle, needs to be trained. Sunscreen, especially chemical filters, should be used in a very limited way, as there are better ways to protect your skin from the sun.

Our skin needs sunlight to synthesise vitamin D, which is very important for our skin, bones and immune system. Therefore gradual tanning is the best way to get the sunlight your body needs, without damaging your skin. Start with a few minutes and then increase day by day). Use physical protection (hat, long sleeves, etc.), if the sun is very strong or if you have been exposed already for a while.

Another way is to help the skin from the inside. Certain foods increase the activities of the melanocytes, which are synthesising the skin pigment melanin. Green and orange plants are the ideal allies to help your skin: pumpkin, carrots, spinach, mangold, parsley, mint, green tea and also berries activate the skin’s autoprotection. You should start eating a few weeks before sunbathing.

We are excited that our LE PURE certified organic skincare line is now available at the prestigious LUDWIG BECK store in Munich. LUDWIG BECK is not only an extraordinary store, it can look back at a long and successful history.

It all started when young button maker and dress trimmer Ludwig Beck opened a workshop in 1861. Starting with only a few workers Ludwig Beck managed to expand his business steadily and even King Ludwig II of Bavaria was one of his customers. The company remained in the Beck family until 1938 when it was sold to Gustl Feldmeier who led LUDWIG BECK through the next decades. Gustl Feldmeier not only expanded the store he also created the famous flagship store on Marienplatz in Munich. The department store is located in the heart of Munich and has become an indispensable part of the cityscape of Munich. 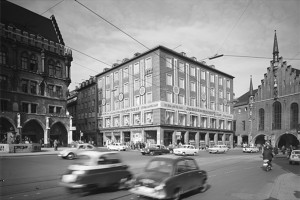 Nowadays LUDWIG BECK is famous for offering a unique shopping experience that satisfies all wishes of their customers. The flagship store is therefore called “Store of the Senses”. Furthermore the store’s originality and creativity has made into one of the most influential and trendsetting stores in Germany.

Besides offering well known luxury products, clients can also find niche products, which makes LUDWIG BECK one of the leaders in niche organic skincare. We are very proud to be a part of this success story.

Last Thursday Cortana, LE PURE Skincare and Qikobido organized a cocktail in Cortana’s store in Barcelona. Clients and members of the press were able to talk to designer Rosa Esteva about her new collection, try LE PURE’s organic skincare line and watch Mariona Aupí’s hand during a live session of Kobido, the ancient Japanese facial massage.

The creators of LE PURE, Julia Atzesberger and Marie Carrasquedo held a speech about the inspiration for their skincare line and what makes it a unique alternative in the market. The evening’s happenings were immortalized thanks to photographer Isabella Antonelli and Anna de Codorníu was the delicious cava of the evening.

https://www.lepure.com/wp-content/uploads/2015/04/RT-VELVET-HYDRATION-hibiscus.jpg 1729 2594 Julia Atzesberger https://www.lepure.com/wp-content/uploads/2016/10/LE-PURE-Logo-Web-300x137.png Julia Atzesberger2015-03-22 13:23:392015-05-13 13:03:57Cortana presents LE PURE Skincare
Scroll to top
We use own and third-party cookies to ensure that we give you the best experience on our website. If you continue without changing your settings, we’ll assume that you are happy to receive all cookies on this website.OK